How to Install Pluto TV on Firestick and Kodi in 2022?

If you want to add Live TV to Firestick or Kodi, Pluto TV is the way to do so. Pluto TV, essentially a free cable TV streaming app, is one of the best Live TV Kodi addons you can get. It lets you stream a good number of cable TV channels for free. The only downside to it is that it is supported by ads, and you will have to sit for commercial breaks during streaming, but that gives it the touch of real cable TV.

While you might think that Pluto TV can only stream cable TV channels, that’s not actually the case. You can also find a wide array of on-demand content within Pluto TV, such as TV series and movies.

Pluto TV lets you stream popular TV channels, such as MTV, CNN, NBC News, CBSN, and NFL Channel, among many others. There are also many in-house channels featured on Pluto TV. The best part about this platform is that it is an official app, and you can find it on mobile app stores like Amazon and Google Play Store. No matter what you stream, Pluto TV is legit and free, so you won’t have to face any legal consequences. In other words, you are not bypassing any copyright claims via this platform.

You can make an account and sign in to Pluto TV as well. Doing so will let you sync your content, so you can continue to where you left off after switching devices.

You can install Pluto TV on Amazon Firestick, Kodi, or any other device. There are two different ways of downloading it on various devices. First, we are going to install it on Amazon Fire TV Stick.

Pluto TV is officially available on the Amazon Appstore, and you can easily download it by searching it on your Amazon Firestick. You don’t need to sideload it on your device. It is a very simple process, and we will walk you through each step, so let’s get into it.

How to Use Pluto TV on Amazon Firestick?

Let’s learn how to use Pluto TV on Amazon Firestick. Pluto TV has an easy-to-understand UI, making it very user-friendly. Even if you are not a tech enthusiast, learning it will be quick and easy.

To launch Pluto TV, go to the end of the Quick Access Bar and choose the last option before settings.

Here you will see all your installed apps. Scroll down and select the Pluto TV app. Click to open it.

Pro Tip: If you want to change your Quick Access apps, here is where you do it. Just go to the app you want in your quick access bar, then press the hamburger menu button on your remote. Then, select more and move the app to where you want it on the quick access bar.

Once you’ve launched the Pluto TV app for Firestick, you will see the following screen. 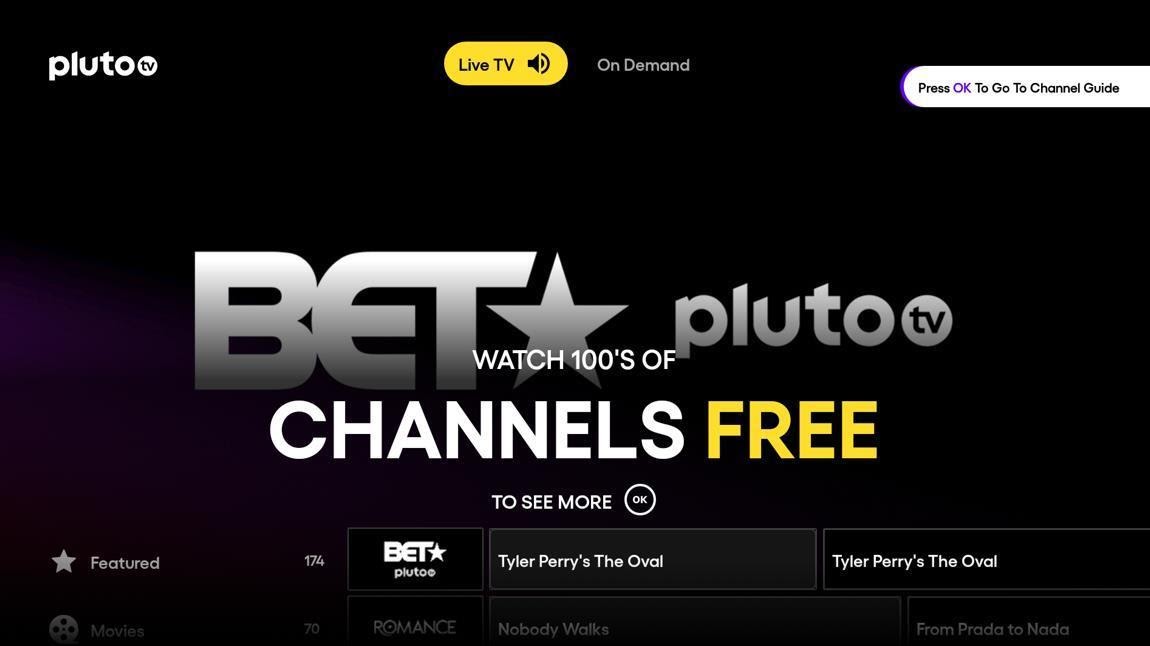 There are two options at the top-middle part of the screen: Live TV or On Demand.

Live TV will let you watch all the live TV channels.

On-Demand will let you watch TV series and movies whenever you want to.

Let’s talk about them in detail. This will help you in getting a better understanding of what to expect from Pluto TV.

When you open Pluto TV, Live TV is the default screen. Here, you can watch all the live TV channels. You can see the selection from the channel list. You can also look through the EPG (electronic program guide) or TV guide on this screen.

If you love to watch your TV with subtitles, you can easily activate them. Just press the down button and click on CC at the bottom right corner to activate subtitles during playback. You can choose the preferred language for subtitles and then click on OK.

The on-demand option gives you access to the world of free movies and TV shows. When you choose On-Demand, you will open a menu on the left, showing you all the TV shows and movie categories.

Choosing a category from the movies or TV shows opens a list of movies on the right with their poster image. You can scroll through them and select the one you want to watch.

Just like Live TV, you can press the down key on your remote, and a small menu will pop up on the bottom right corner. Here you can play/pause, forward/rewind 15 seconds, and choose the subtitles.

You can make a Pluto TV account and use it for signing in to the app on your Firestick. While logging in isn’t required, we still recommend it. Once you’re signed in to Pluto TV, your watchlist and preferences will be synced across the devices/platforms where you have Pluto TV signed in. It will also give you access to Pluto TV Control Center, which provides numerous online remote functions.

See the steps below.

Pluto TV is not only limited to Amazon Firestick or Kodi. If you have an Android TV, you can easily install it via Google Play Store. It is available on Android stock boxes and Android TV OS Boxes such as Mi Box and Nvidia Shield.

To install Pluto TV on your Android TV, follow these steps:

Android TV and Firestick have the same Pluto TV interface. But if you are using stock Android TV Boxes, your default orientation might not match your TV screen. Remember that stock TV boxes use an OS designed for mobile phones, so the orientation is set to portrait. But you can easily change it to landscape from the settings.

You don’t need a big, fancy device and TV to enjoy Pluto TV. You can download it on Android mobile phones and tablets. Simply do the following:

Pluto TV is not limited to just Android devices. If you have an iOS device like iPhone, iPod Touch, or iPad, you can download it from Apple’s App Store, and it is officially available in App Store.

Pluto TV can be downloaded on Mac OS and Windows PC. The process is very simple but different for both of them.

Mac OS: You can download the Pluto TV app from the App Store or use a web browser and stream on the Pluto TV website.

Windows PC: Use the Windows Store and download the app on your device. You can also stream directly from their website using a web browser.

How to Install Pluto TV Addon on Kodi?

If you don’t want to add different apps to your Firestick and would rather use Kodi instead, you can try the Pluto TV Kodi addon. This way, you can still enjoy the platform while keeping everything on Kodi.
Note: If Pluto TV doesn’t work on Kodi itself, you can try to use an APK or the Downloader App by sideloading Pluto TV (or Chrome to watch Pluto TV via browser).

Let’s get to the process.

If you don’t see Kodi Add-ons Repository, skip the next step.

Is Pluto TV Safe and Legal?

Pluto TV is not illegal. So, whatever you want to stream on it, you don’t have to worry about breaking any law. We highly recommend you try it out to enhance your streaming experience. It will bring cable TV to your streaming platform while saving you money and the troubles of switching platforms to watch different cable TV channels.

Pluto TV Not Working, Here’s How to Fix?

Plenty of guides out there make it seem easy to get Pluto TV on Firestick to work. While it’s not rocket science to install Pluto TV, there’s a possibility that (depending on your locale) you might not be able to access Pluto TV. To fix this, you can try to create another Amazon account – one based in a Pluto TV supporting country like the UK – switch to that one on your Firestick, and then connect to a good VPN, such as ExpressVPN, while using a browser to access PlutoTV.

If you love TV but don’t have access to a premium cable network, you just don’t want to pay for dozens of channels that you won’t even watch, or you are a college student who can’t afford to pay for cable, Pluto TV is your best alternative. It’s a great streaming platform that won’t get you into any legal troubles. Plus, viewers get to enjoy HD channels, movies, and TV shows for free. You can always sign in to your Pluto TV account to keep your watchlist synced and data saved.