Mobdro Not Working: What Happened and What's Next?

This guide lists the best Mobdro alternatives that work on Firestick, Android, and Windows PC. These recommended apps came out on top after several reviews and testing third-party live tv streaming platforms.

For Mobdro alternatives that are specific for Firestick (including ones for a jailbroken Firestick) and as IPTV services, check out our other posts:

Mobdro has indeed been the go-to live tv streaming platform on Android for many years, but it’s high time to look for replacements that users can download and start using today. With Mobdro’s recent shutdown, many users are still wondering, “When is Mobdro coming back?” The answer is never! The app stopped working in March after Premier League sued and won the legal battle against Mobdro. You can still download the app, but you’ll get a connection error every time you try to access it.

Using a free live streaming app is legal, but streaming copyright-protected content isn’t. The best way to work around this is to use a good VPN like ExpressVPN to avoid being monitored by your ISP.

Check out our expert review on ExpressVPN: ExpressVPN Review 2023

Is It Legal To Use Third-Party Live Streaming Apps?

Using any apps like Mobdro is entirely legal, but using it to stream copyrighted content on your device isn’t. Disclaimer: We do not encourage the prohibited use of copyrighted content. The apps mentioned below are mainly for informational purposes. We leave it to the user’s sole discretion to download these free platforms or not.

Now, keep in mind that your IP is visible to everyone. Governments and ISPs can monitor their users’ online activities. A VPN creates a private tunnel through the internet. It’ll hide your IP, and you can safely stream any content you like without raising any alarm bells. A VPN can also protect you from Man in the Middle attacks by monitoring the tunnel and closing the connection if any eavesdroppers are detected.

Worried that using a VPN will slow down your connection speed? We recommend ExpressVPN, which is one of the fastest and most secure VPNs out there. It’s super easy to install on any device. The service also has an ExpressVPN 30-day money-back guarantee. So, if you don’t like it, you can get a refund. 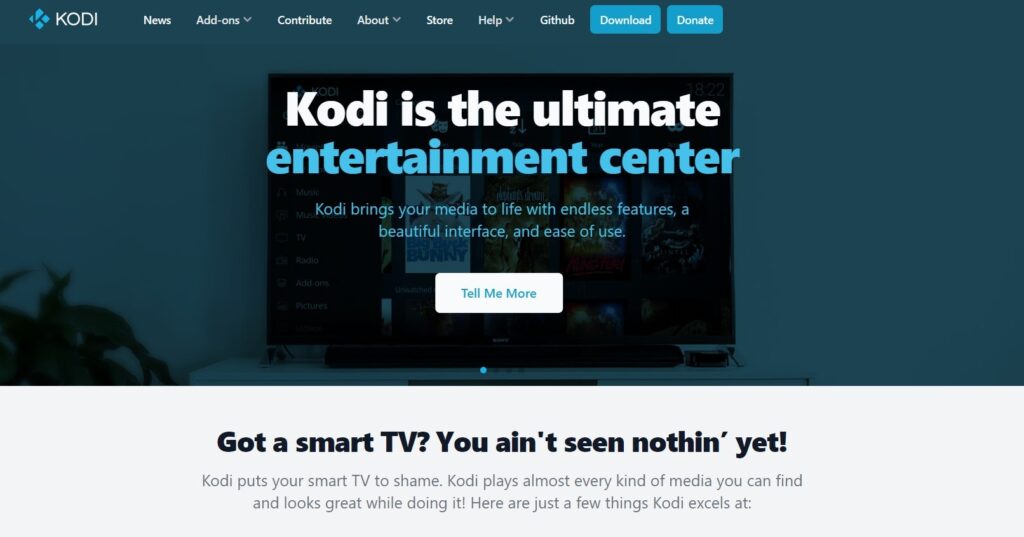 Kodi is not just a live streaming platform; it’s the ultimate home theater app. Kodi works a bit differently from other apps. It comes without any content. You’ll have to add content through Kodi’s free add-on feature.

Just search for the channel or content you’d like to stream on Kodi’s addon section, and it’ll appear on the interface. You can also add your own media like photos, music, video, podcasts, and much more.

Don’t forget to protect yourself by getting the best VPN for Kodi. 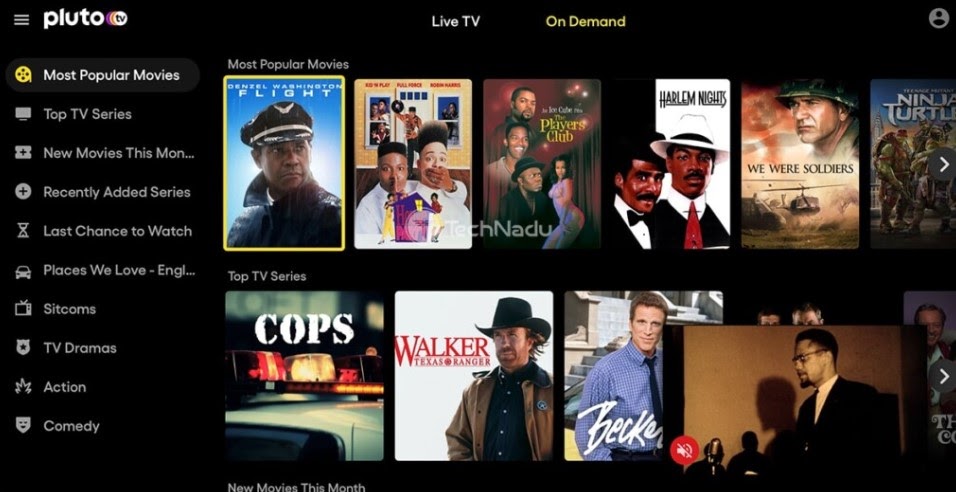 Just like Mobdro, Pluto TV is a completely free and easy-to-use live TV streaming application. It has a great collection of 24/7 live-streaming channels such as SkyNews, MTV, Comedy Central, CNN, and many more. In addition, it also has a good collection of on-demand content.

You don’t need any subscription to access Pluto TV, but it’s an ad-supported platform. So, you’ll generally see a lot of ads when using the application. Also, Pluto TV is only available in the USA. But you can easily access it by connecting to a good VPN, which you should be doing for any third-party streaming platform. 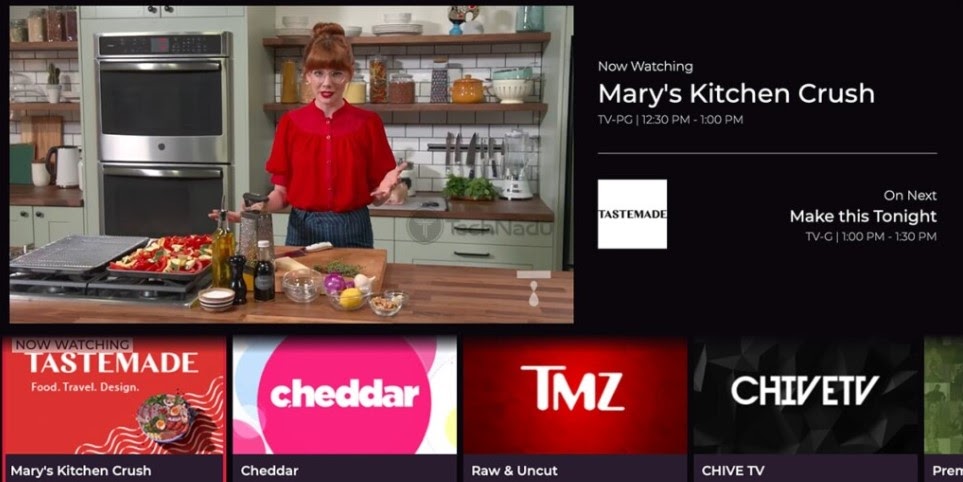 Redbox was popular in the earlier days as a DVD rental service. However, the company entered the media-streaming market last year. It’s a free web-based streaming platform, which means that it doesn’t have an app yet. You can simply visit the Redbox official website using a browser and start streaming different content.

Even though it’s free, Redbox only has branded content for now. You’ll find just a handful of TV channels and 24/7 live streams. The platform is very new, but it’s increasing its collection every day. So, you might be able to see those popular premium TV channels on Redbox very soon.

Xumo TV is an excellent alternative to Mobdro. The interface itself is very similar to Mobdro, and it’s completely free-to-use. The Xumo TV app offers you around 190 channels for live streaming. You can choose between live TV Channels, popular live shows, movies, entire season tv-shows, and much more.

You can find the Xumo TV app on the Amazon Store, Apple Store, Google Play Store, Roky, and almost every platform. It’s an ad-supported app like Mobdro and Pluto TV. Take note, though, that Xumo TV is only available in the US, Mexico, Canada, Brazil, and some European countries at the moment. Of course, you can always use ExpressVPN to access it. 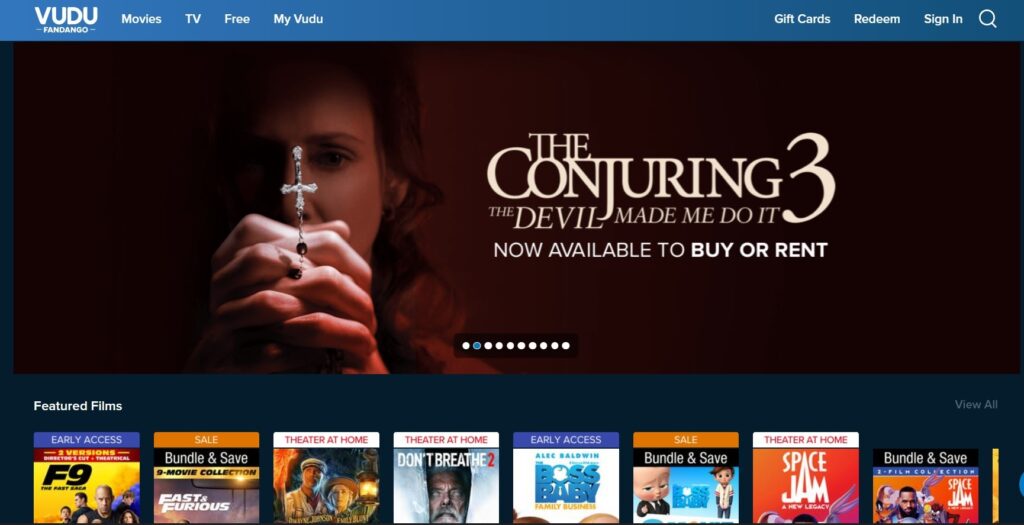 Vudu is a popular web-based platform for streaming tv shows and movies. You can directly access the platform through their website as there is no app for Vudu. It offers 4K streaming capability, and it’s compatible with almost any smart device.

Vudu provides both free and premium content. You can access hundreds of free content on the platform, as well as buy or rent the latest premium content. Vudu serves more than 60 popular TV networks.

The following live TV apps are equally great alternatives to Mobdro, but they are unverified. It means that these apps or platforms do not hold any legal license for content streaming, so official service providers like Apple, Amazon, or Google do not offer them.

Understandably, you won’t find these applications on the app store, but you can install them by downloading the APK file. 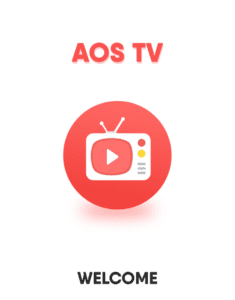 AOS TV is a free live tv streaming app like Mobdro. It’s available for Android-supported, Firestick, Fire TV, and PC. The app has over 1000 TV channels to stream from. The interface is very user-friendly.  You can simply search for your favorite TV channel, and you’ll see several links to stream it. If one link doesn’t work, you can quickly switch to another.

You can install AOS TV by downloading the APK file from their website. Once you download the APK file on your device, you can simply open it and the app will install automatically. There’s no shortage of content on AOS TV. In addition to live TV shows and movies, you can also stream your favorite sports matches and events.

AOS TV also allows users to stream local channels from more than 100 countries around the globe. Its content library is even bigger than Mobdro. 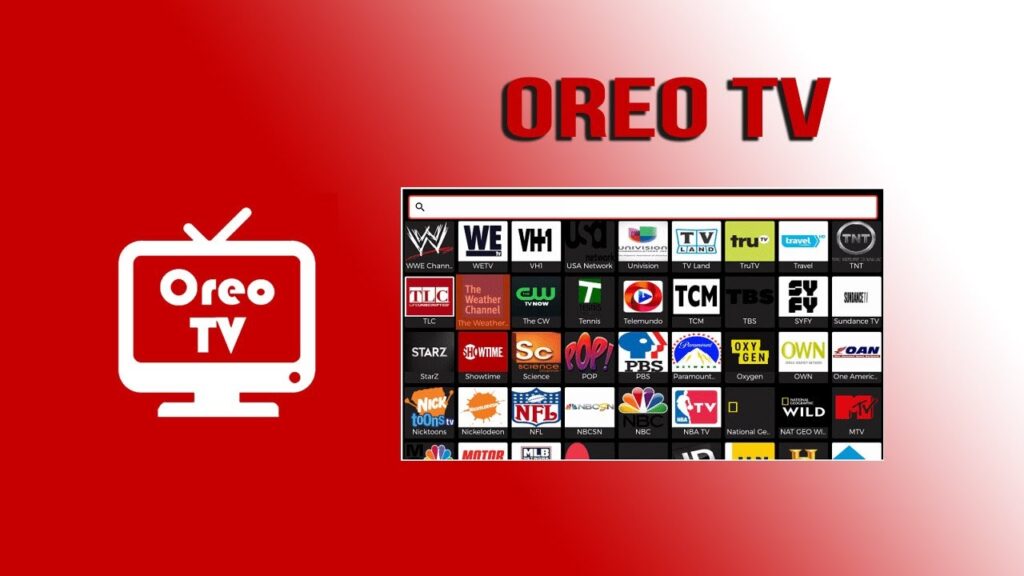 Oreo TV is another free Mobdro alternative that’s compatible with Firestick, Android and iOS devices, and PC. It is a live streaming app that has a good number of UK, US, and Indian TV channels. It also offers a ton of TV shows, movies, and documentaries – all accessible for free. The content library of Oreo TV is comparable to major paid services such as Netflix and Hulu. The only disadvantage is that it’s an ad-supported platform.

The app is very well optimized, which means that you won’t notice much lag or buffering if you have a decent internet connection. Nonetheless, we always recommend using a fast VPN such as ExpressVPN to avoid any connection throttling, so that you can enjoy an uninterrupted streaming experience.

You can install Oreo TV by downloading the APK  file from its website. 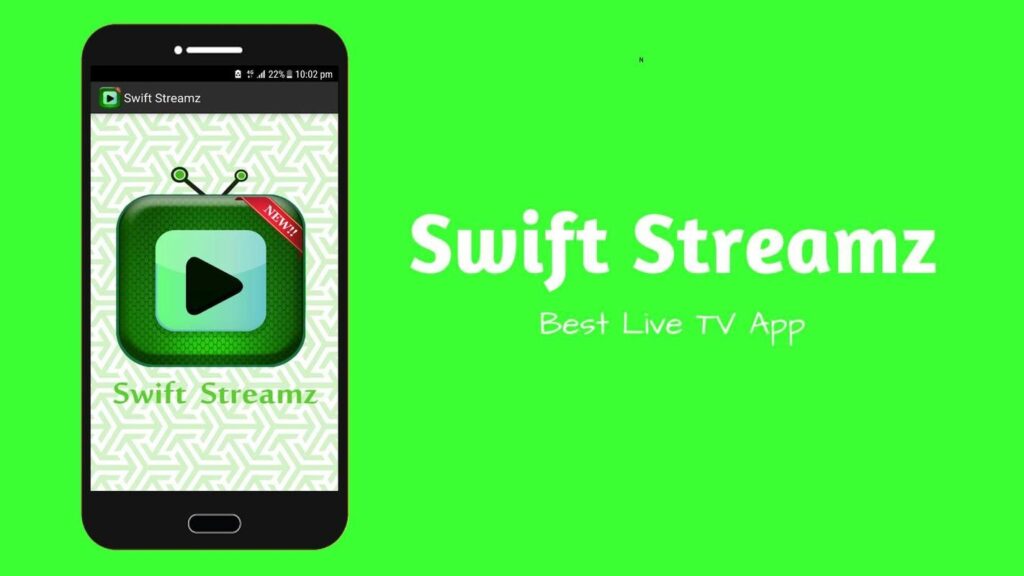 Swift Streamz is an app that lets you stream 700+ channels in HD from around the world. It’s a newly launched app that’s getting a lot of popularity because it offers a large collection of TV channels and a very easy-to-use interface.

In addition to popular international channels, Swift Streamz also offers you local TV channels from around 30 countries. It also supports all major smart devices, and you can install it on Android, iOS, Firestick, or PC.

Live Net TV is one of the best alternatives to Mobdro in 2023. This app has more than 800 TV channels across 9 different categories. You can stream movies, live news, cooking shows, live concerts, sports, religious events, kids’ shows, and so much more.

You can also choose whether you want the stream quality to be in SD or HD. So, even if you have a slow internet connection, the app will let you stream your favorite channels smoothly. One of the best things about Live Net TV is its constant updates. The development team adds new channels and live streaming links almost daily. So, the number of contents is increasing every day.

You can also stream newly released movies and TV shows under its Video-on-demand category. You can download the APK file from their website. 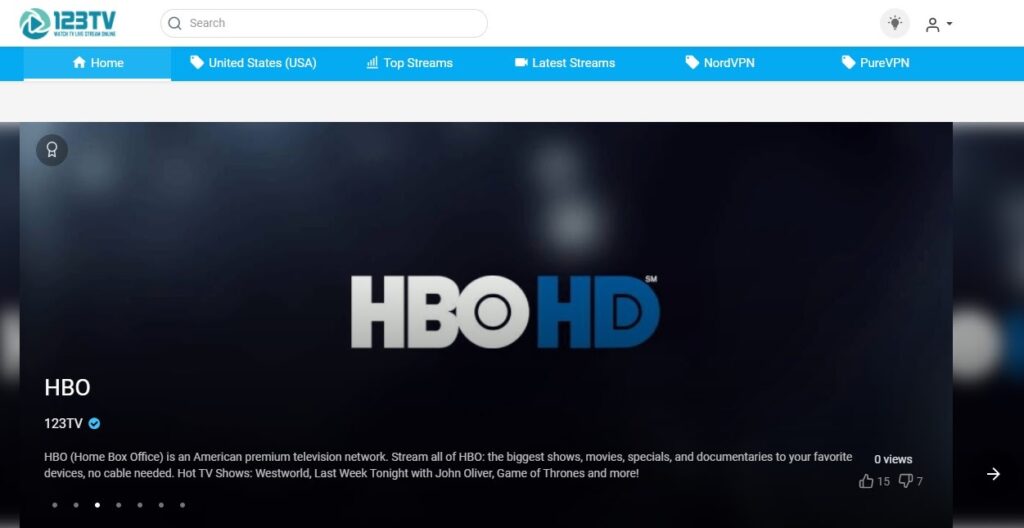 123TV is one of the free live TV streaming platforms you’ll find out there. It’s not an app like Mobdro as the platform can only be accessed directly through their official website. However, even though it’s not an app, we included 123TV because it’s one of the most stable and optimized streaming sites.

The platform is ad-supported, but the ads are not nearly as frequent as other streaming sites or the other apps listed in this article. 123TV offers over 80 popular US TV channels, including HBO, Disney, Cartoon Network, NBC, Fox News, Animal Planet, CBS, and so much more. It also has tons of movies and TV shows, including newly released content.

The website interface is nice and light. It loads very quickly, and there are no pop-up ads on the home screen. 123TV is a great option for streaming content on any device. All you need is a browser, and you’re good to go.

Why You Should Use a VPN For Online Streaming?

You should always consider using a VPN whenever you’re browsing or streaming media content on the internet. Most online content is copyright-protected. By using a VPN service, you’ll be able to hide your online activities (from your ISP and government regulators) and not worry about the legality of streaming free content.

Also, a VPN can often give you a more stable and even faster connection speed. Most internet service providers intentionally reduce your internet speed to minimize traffic and avoid bandwidth congestion on the local network. This is called “bandwidth throttling.” It can be really frustrating when you’re streaming content online. One minute you’re watching a movie in HD; the next minute, it starts to buffer or lag.

With a VPN, you’re no longer at the mercy of your ISP. Your online activities stay hidden when connected to a VPN – no monitoring or throttling your connection by your ISP.

How to Install ExpressVPN On Firestick?

Go to the search option on your Fire device, and type ExpressVPN. 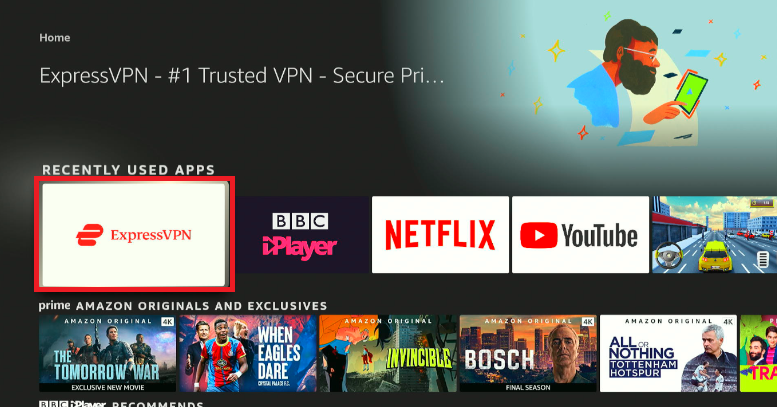 You’ll see the app come up on the screen. Click on it and the ‘download’ option will appear. 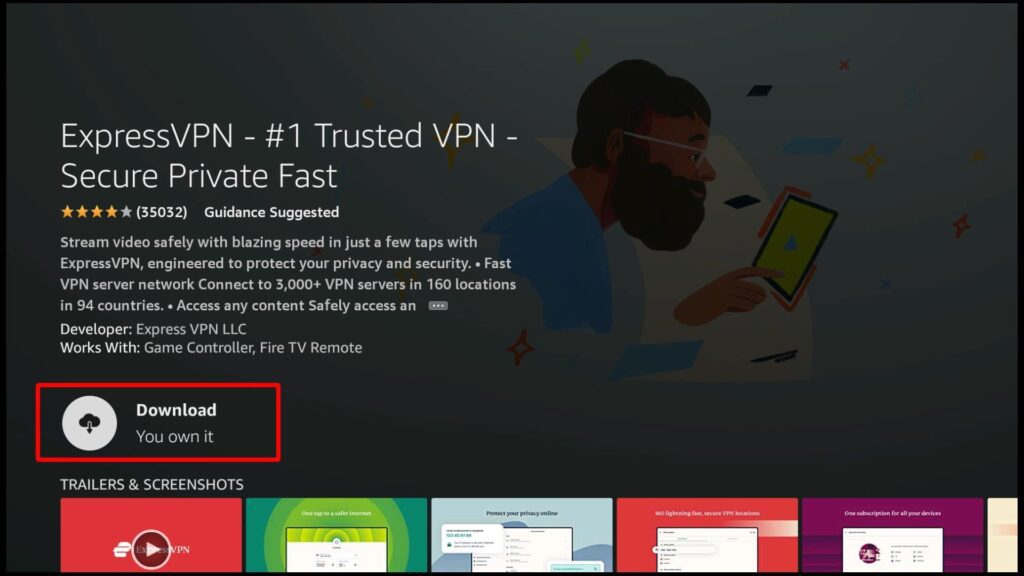 2. Set up the ExpressVPN app

Once you open the app, you’ll see the option to register as a new user or ‘sign in’. If you already have your credentials, sign in to the app using your email and password.

The app will ask you to share ‘anonymous information’ for making the ExpressVPN app better. Select your preference. Then it’ll tell you to ‘set up your VPN’. Press ‘Ok’. 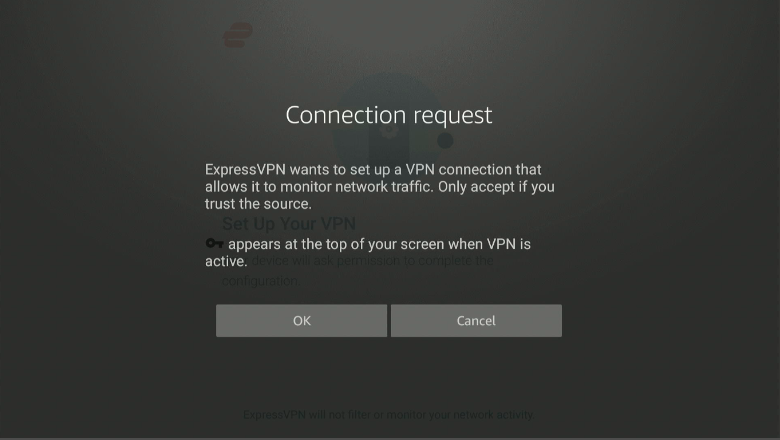 3. Connect to a Server Location

Now that the app has started, you can click on the big power button icon to connect to the VPN and press it again to disconnect.

There will be a drop-down list below the button. You can choose your preferred server location from here. If you simply press connect without choosing a specific location, the VPN will automatically select the nearest location to you.

Let’s Wrap This Up

Any of our listed apps in this post will be great Mobdro alternatives for users. You can always use multiple apps to enhance your viewing experience and gain access to a larger content library. After all, it’s free. Always remember to keep your VPN running when you’re downloading or running these apps. This will ensure you have a secure and stable streaming experience.