If you are a big fan of movies and like streaming for free, you’ve probably heard about KickAss Torrents. Although the site is shut down now, KickAss Torrents was the go-to site for millions of torrent users in its glory days. It was famous due to its vast library of torrent downloads and mirror links for peer-to-peer sharing.

That’s why finding the best KickAss Torrents alternatives isn’t easy. It requires more than a Google search. More often than not, users stumble upon mirror websites that pose a risk to their confidential data. Don’t worry!

This article will take you through a list of the ten best KickAss Torrents alternative sites right now. We’ve personally checked every site and have ensured that you get an excellent source to enjoy your favorite TV shows, movies, or reality shows.

So let’s get started. Here are the ten best KickAss Torrents alternative sites in 2023:

With a whopping 70 million monthly visitors, 1337x is one of the largest torrent sites. 1337X is popular for having more leechers and seeders than any other torrent site available right now. Unlike the other KickAss Torrents alternatives, 1337x offers users a unique library of applications and software. It also provides links to other popular torrent sites like KickAss Torrents, The Pirate Bay, Movierulz, Limetorrents, etc.

Another good thing about 1337x is its super-friendly user interface. It has different categories, allowing the users to navigate seamlessly through its library. You might find it challenging to access 133X main domain – 1337x.to – because it is blocked in many countries. In that case, you can try using 1377x.to or 1337xx.to.

Zooqle is another great alternative for KickAss Torrents. With around 8 million monthly visitors, it has a huge library of movies, games, TV shows, even ebooks.. Zooqle’s RSS consists of both Magnets and .Torrent.

The site’s home page is divided into different sections – TV, Movies, etc. It also has a “Most Seeded” section where users can see popular choices. Moreover, users can also look at new torrents in the “Just In” section. The only downside of Zooqle is that it gets banned in many countries, including Brazil, France, Japan, the United Kingdom, the US, Italy, India, etc. You might need to use a VPN to get access to Zooqle.

RARBG is another great site for downloading the latest movies, TV shows, games, and music. Its monthly base of 57 million shows that the site is pretty popular among torrent users for its massive content library.  A unique thing that you’d find while scrolling through RARBG is the latest news and updates on entertainment.

The site doesn’t have an attractive home page but, instead, it is easy to navigate. Like Zooqle, RARBG is also banned in some countries, including Portugal, Denmark, and the UK. 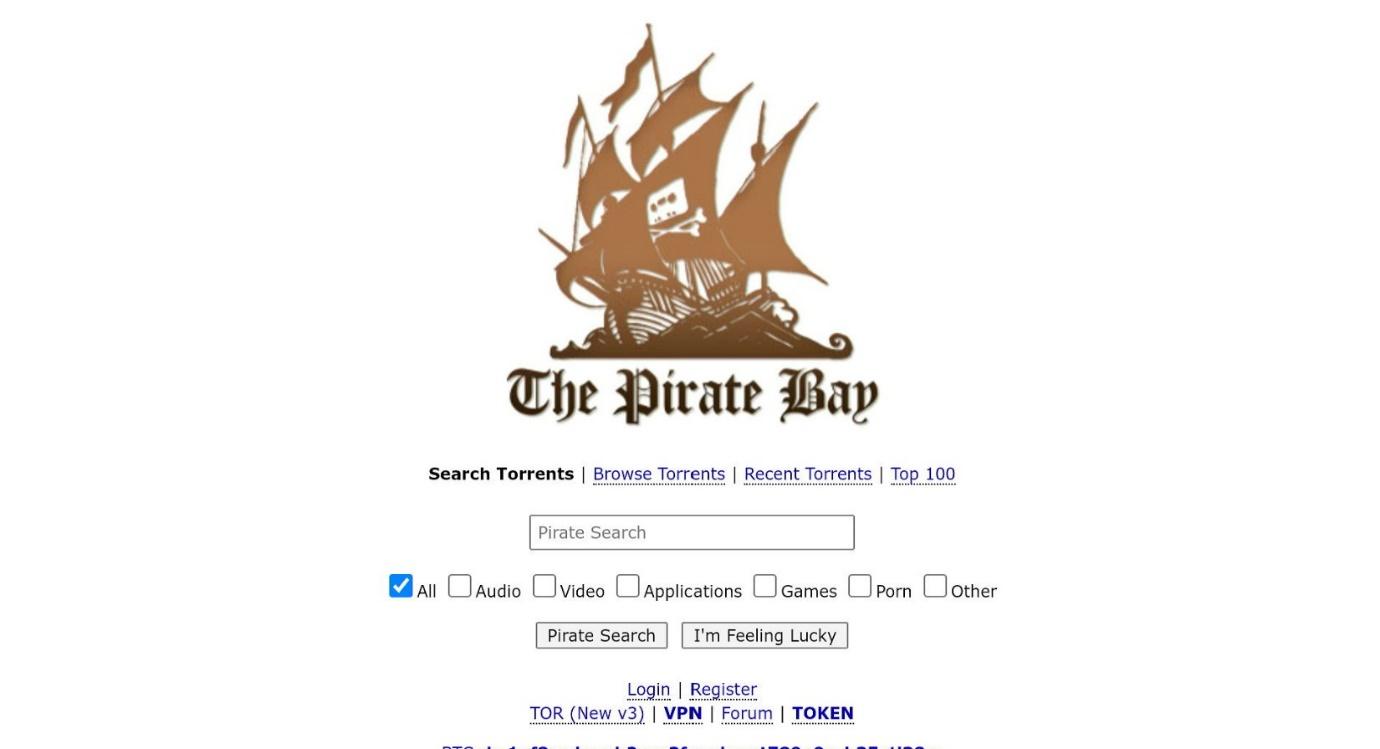 The Pirate Bay is a popular torrent site that receives up to 25 million visitors every month. Whether you want to download movies, audio files, videos, games, the Pirate Bay has it all. Although it isn’t always functional, it is still a preferred torrent site.

The Pirate Bay has a friendly user interface. The home page has different options for navigation. Users can search torrents, browse from their library, look at recent or top 100 torrents. It also offers magnet links. 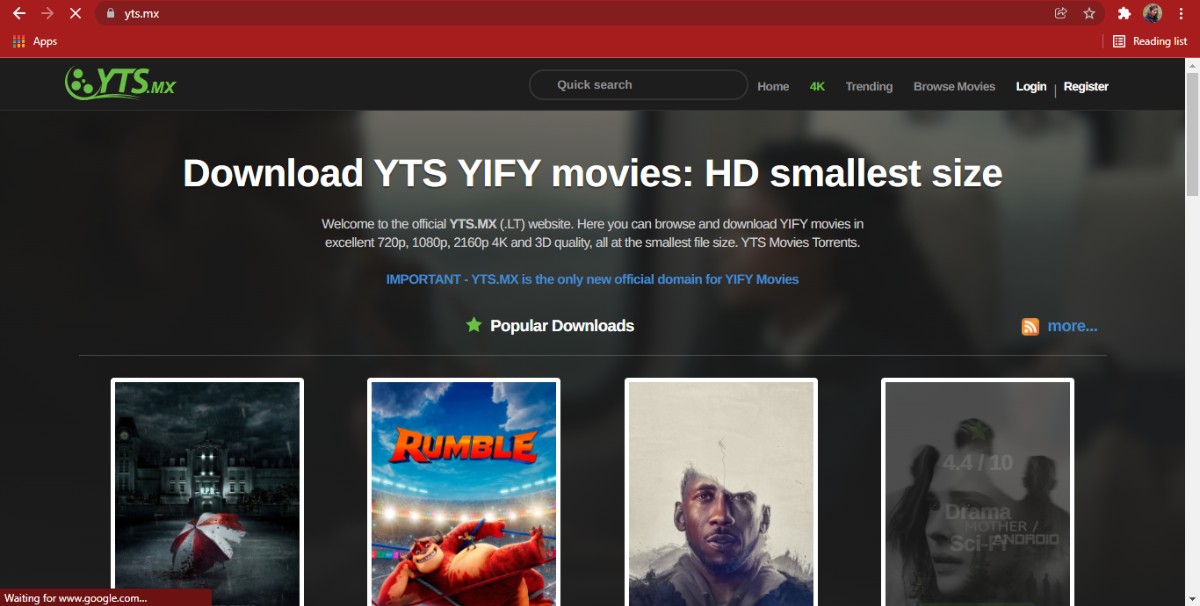 If you have been using Torrent for a while, you must know a lot about YTS, formerly known as YIFY. You’d love the site if you are a movie buff. YTS has a huge library of exclusively movie torrents. There are no sports, games, or apps. However, you can browse and download movies in 4K and HD quality.

The YTS website is visually appealing and consists of many torrents with very high seeds. It is easy to navigate and has an interactive live search, due to which finding any movie is quite simple. Moreover, you will also find all the related information for films and TV shows, including IMDb ratings and reviews on YTS.  Although YTS is a stable torrent site, it has witnessed blockage in the past. In fact, in 2021, the site lost control over its domain name. It’s up and running in most countries now. 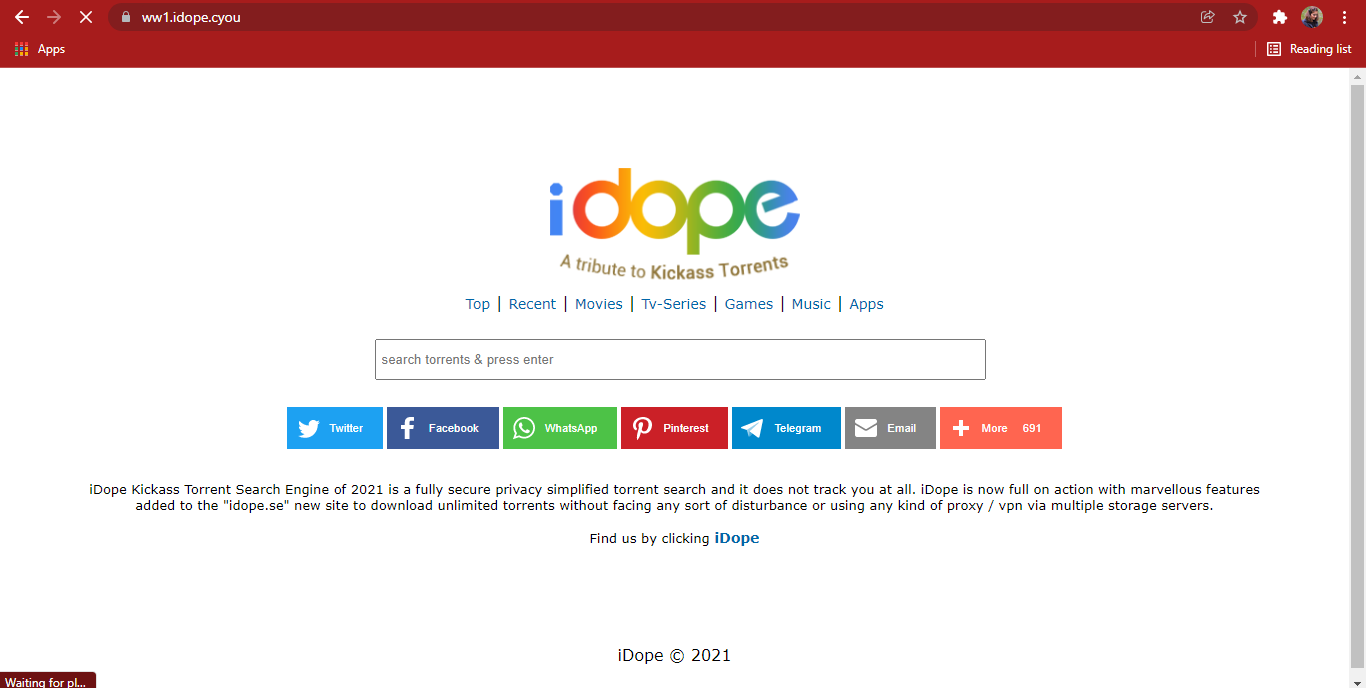 iDope was created as a tribute to KickAss Torrents and hence is a must-visit alternative. It has over 1.4 million monthly visitors. The site updates its database almost every hour, and hence there’s a good chance that you’ll find all the latest movies and TV shows there.

iDope has an extensive library of free indie content in different languages like Hindi or English. Moreover, apart from the large peer directory, it also has a vast network of uploaders. iDope supports multi-device so that you can access it on PC or Android. You can also install a Chrome Plugin. The torrent site claims that it never tracks its users. 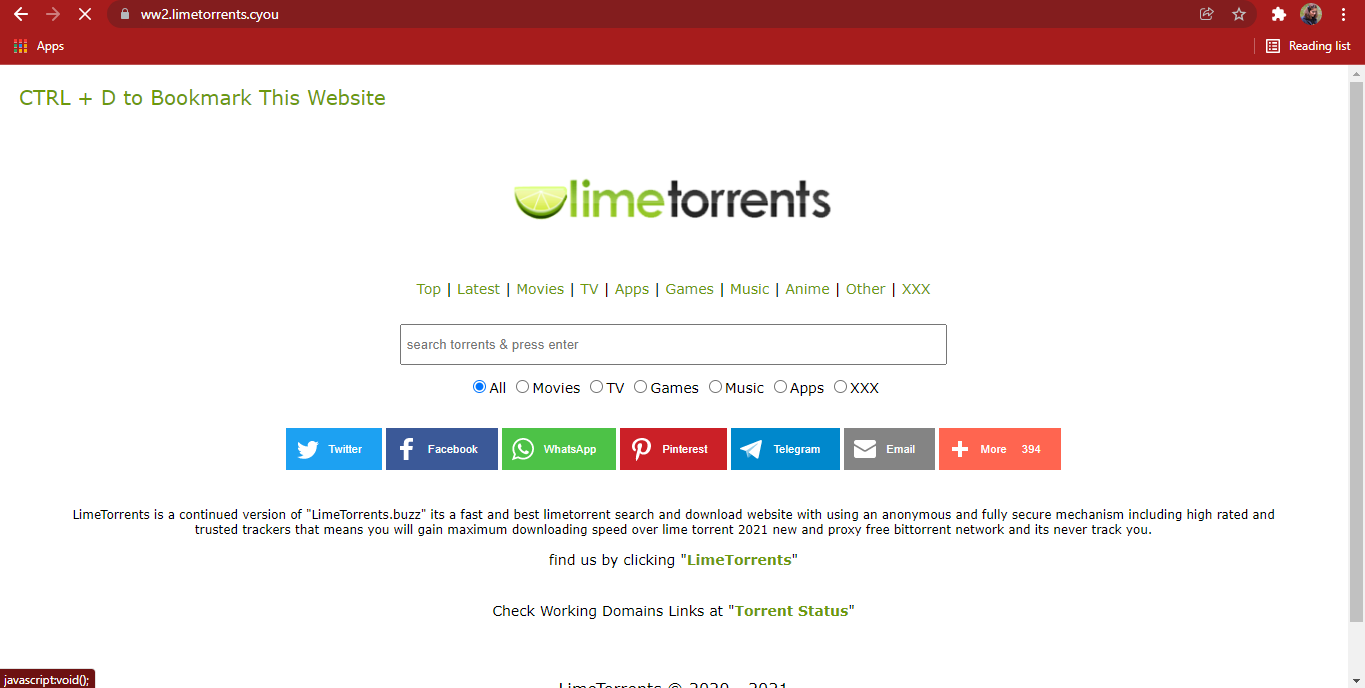 LimeTorrents is also a good option to browse and download software, applications, movies, TV shows, and games. You will also find anime on this site. It has a monthly visitor base of 17 million that has access to over 10 million torrents. Unfortunately, finding the real website is a challenging task. You might end up on a spamming or malicious website. Moreover, you won’t get access to LimeTorrents if you’re in France, UK, or Australia.

You will find its user interface very similar to that of iDope. Almost every option you need is right there on the home page. The library has similar main categories: movies, TV, apps, games, anime, etc. LimeTorrents is one of the few sites on the internet that filters adult content if you want. 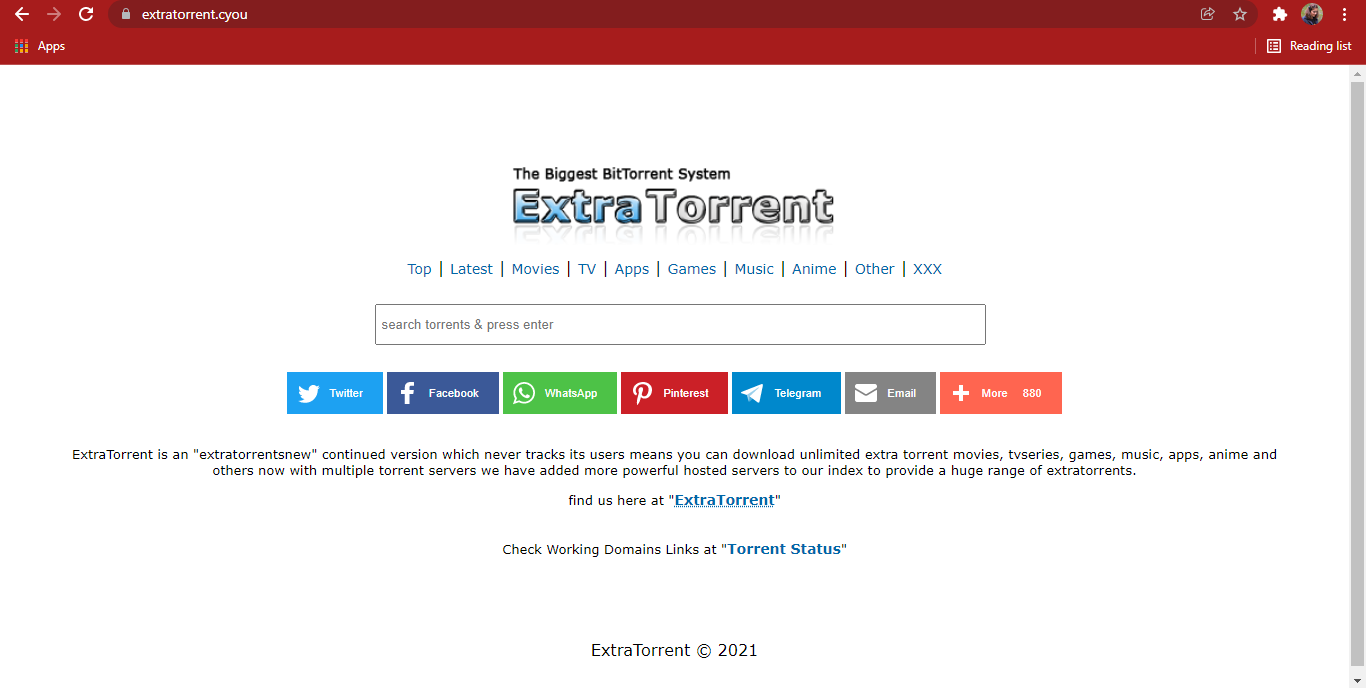 ExtraTorrent was among the 300 most visited websites in 2016. However, in 2017, the official website was shut down without explanation. Due to its vast library of torrents, especially games, movies, and TV shows, it remains one of the popular torrent websites. You can still access mirror or proxy websites with similar features as the official ones.

However, bear in mind that many countries, including Canada, Brazil, the UK, France, Australia, Germany, Japan, Poland, Russia, Sweden, Turkey, etc., have banned the site over copyright infringement. 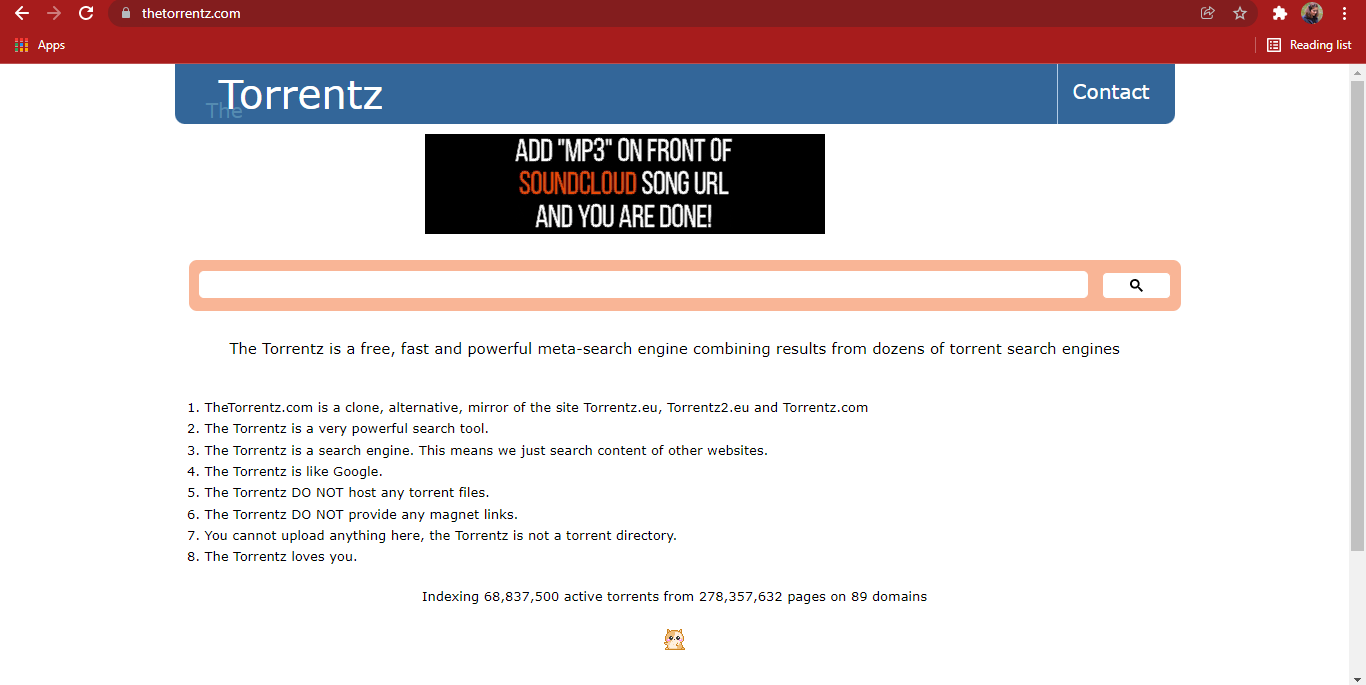 Torrentz2 is another great torrent site and metasearch engine. That means, just like Google, it uses your search query and indexes torrents from 90+ torrent sites. You can choose one of the many sites from the search result to download the desired torrent. While it has all sorts of genres, it is very popular for its music library.

Like ExtraTorrent, the official site of Torrentz2, which was known as Torrentz2eu, was suspended. However, you can check out its proxies or mirror website. 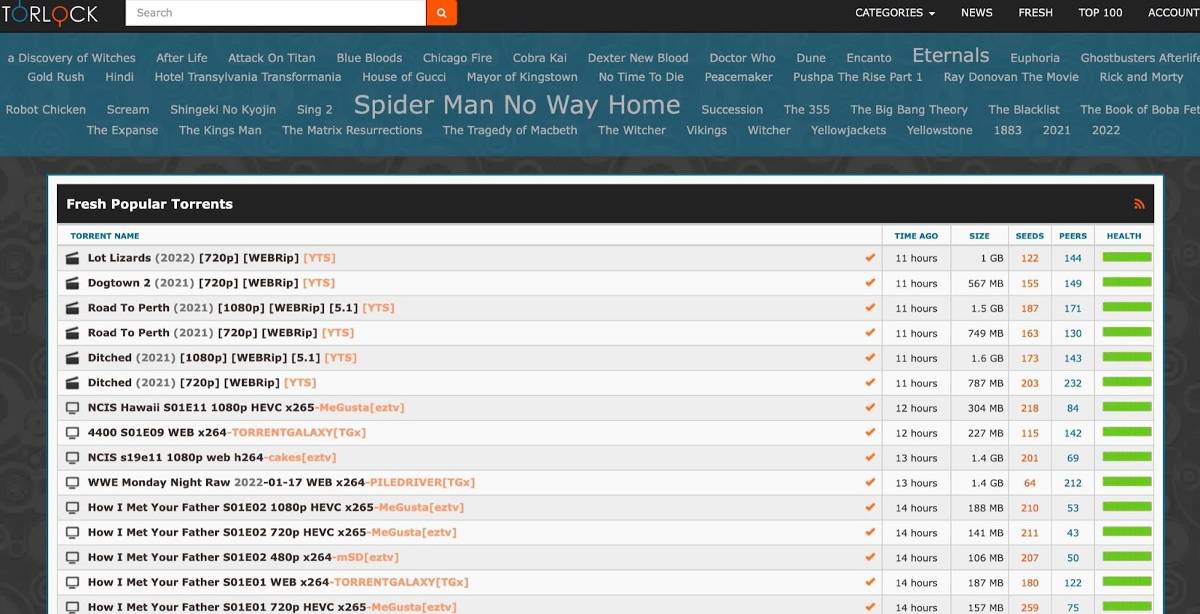 TorLock is a popular torrent index and search engine with a huge library of TV shows and movies. The site receives about 3 million visitors monthly. It is particularly famous for offering access to genuine torrents. To ensure that, it pays $1 every time a user reports a fake torrent. Moreover, the torrent files on TorLock have numerous seeders.

It is a stable site and probably one of the few that didn’t get banned in 2017. It isn’t as attractive as 1337x or YTS. However, it is a viable option to download various TV shows and movies in lower resolution.

Well, that’s all from our side. There are many other KickAss Torrentz alternatives that you can try, like DirtyTorrents, Pirateiro, IsoHunt, YourBittorrent, WatchSoMuch, and TorrentDownloads. These contain a large library of content and have high numbers of seeders.

Torrenting is the best way to stream any content, be it movies, TV shows, sports, or anime, for free. However, it isn’t an easy task. We suggest you use reliable sources to download movies and avoid scamming or malicious websites. Moreover, governments keep on blocking these sites for violating copyright issues. So it would be best if you used a reliable VPN service to access these sites.

Although all the sites are functional at the time of writing, some of them may be shut down by the time you read this. That’s why our team will keep updating this article to ensure that you have the latest information about the best torrent websites.