How to Quickly Install AiryTV on Firestick, iPhone, & Android Devices

This article is a step-by-step guide on installing Airy TV on Firestick, iPhone, and Android devices. The instructions for Firestick work for most Fire TV devices, such as Fire TV Stick Lite, Fire TV Cube, and Firestick 4K.

Amazon Firestick comes with many popular apps installed by default, including the ever-popular ‘Amazon App store.’ You must have already heard about popular streaming services like Netflix, Disney+, Prime Video, Hulu, etc. Today, we will be discussing Airy TV. This extremely underrated service can also be used with Amazon FireStick. AiryTV has got a lot to offer with its 100+ live channels and a plethora of popular TV shows and movies to choose from and for free!

Keep reading and find out how you can get started with Airy TV on various devices.

How to Install Airy TV on Firestick

One of the cool things about Airy TV is that it’s available officially on the Amazon App Store, so we won’t have to sideload the APK separately. The installation process is pretty straightforward. Let’s begin!

Now that we’ve explained the process of installing Airy TV on a firestick let us review how well it works with Firestick. 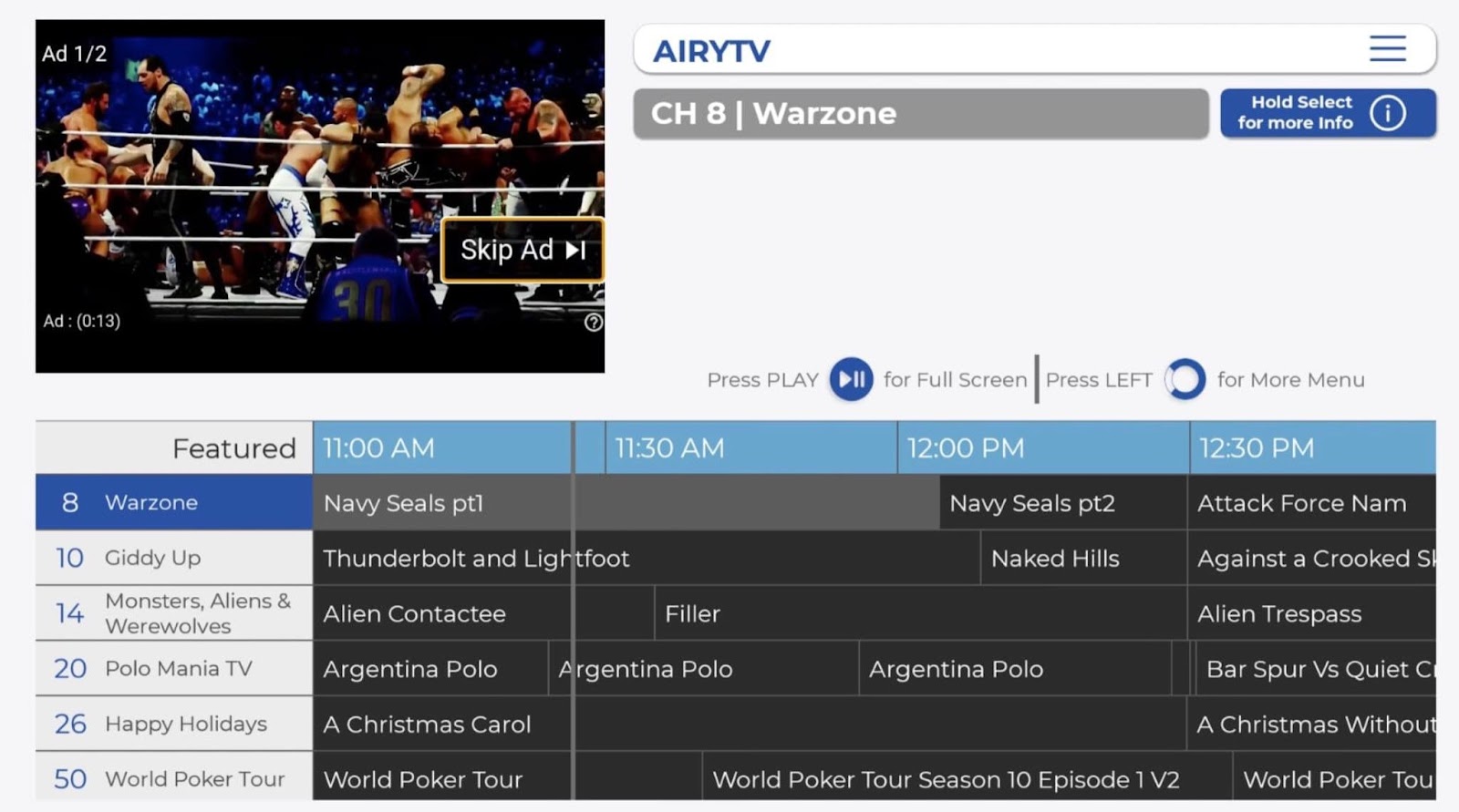 When you launch the Airy TV app on Firestick, the user-friendly interface is noticeable. On the bottom left, you can see the featured TV channels and various upcoming shows with time stamps on the right. When you choose to play something from the catalog, the corresponding media will open in full-screen mode.

As mentioned on the screen, if you click the left button on your remote, you’ll see more options pop up.  By default, you’re on the TV domain of the app, and you can switch to VOD to access more content through Video On Demand. You can also find countless popular TV shows and movies for free. In addition to this, there is the profile menu where you can configure your settings and viewing preferences too. 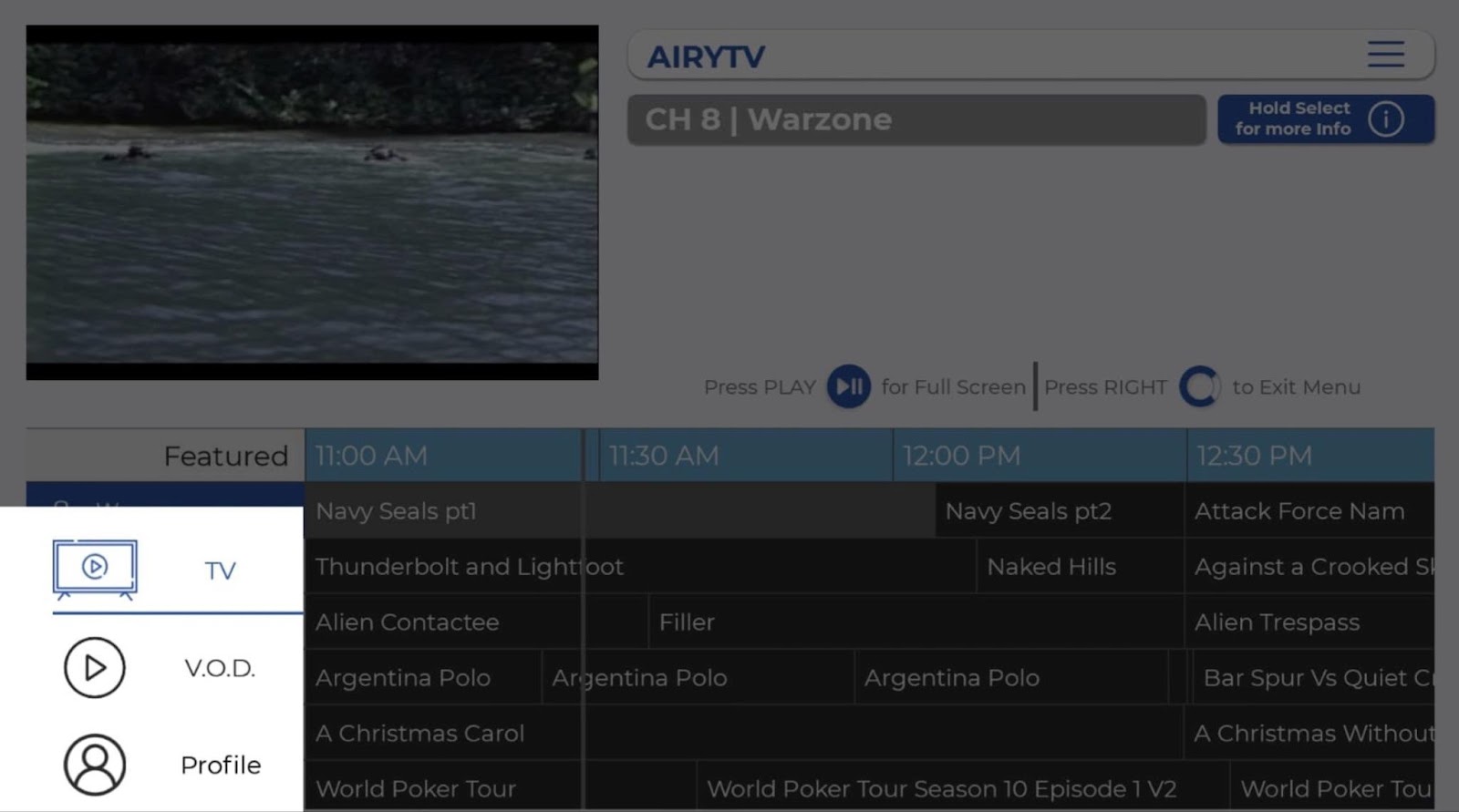 The Airy TV app comes with the New AiryTV theme. If you want to change the theme, click on the options menu on the top right to access more options. Select “Change Theme.” 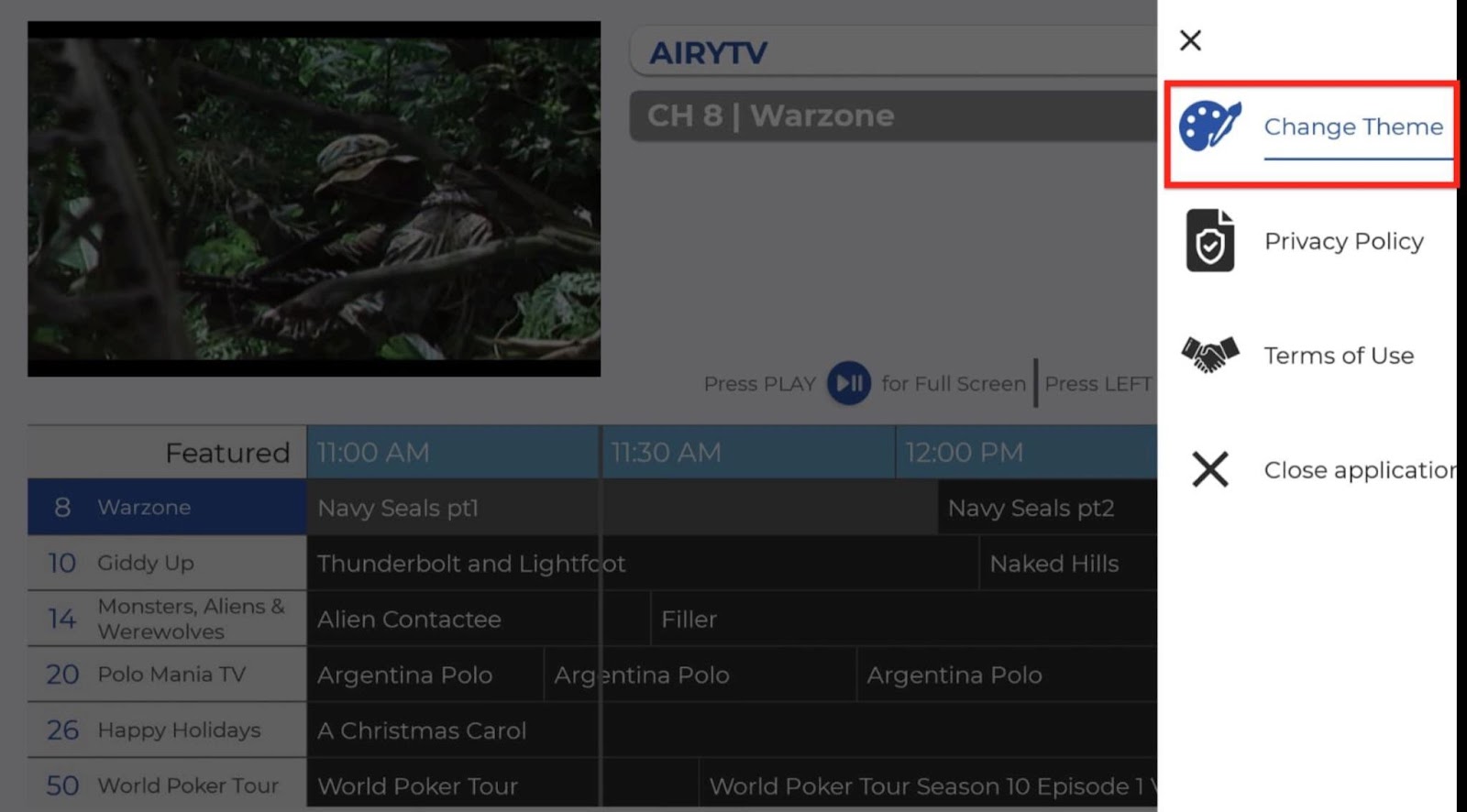 A popup will appear displaying two options, the currently selected one “New AiryTV” and the “Classic AiryTV.” Classic AiryTV is the dark mode theme. You can choose either based on your preferences. 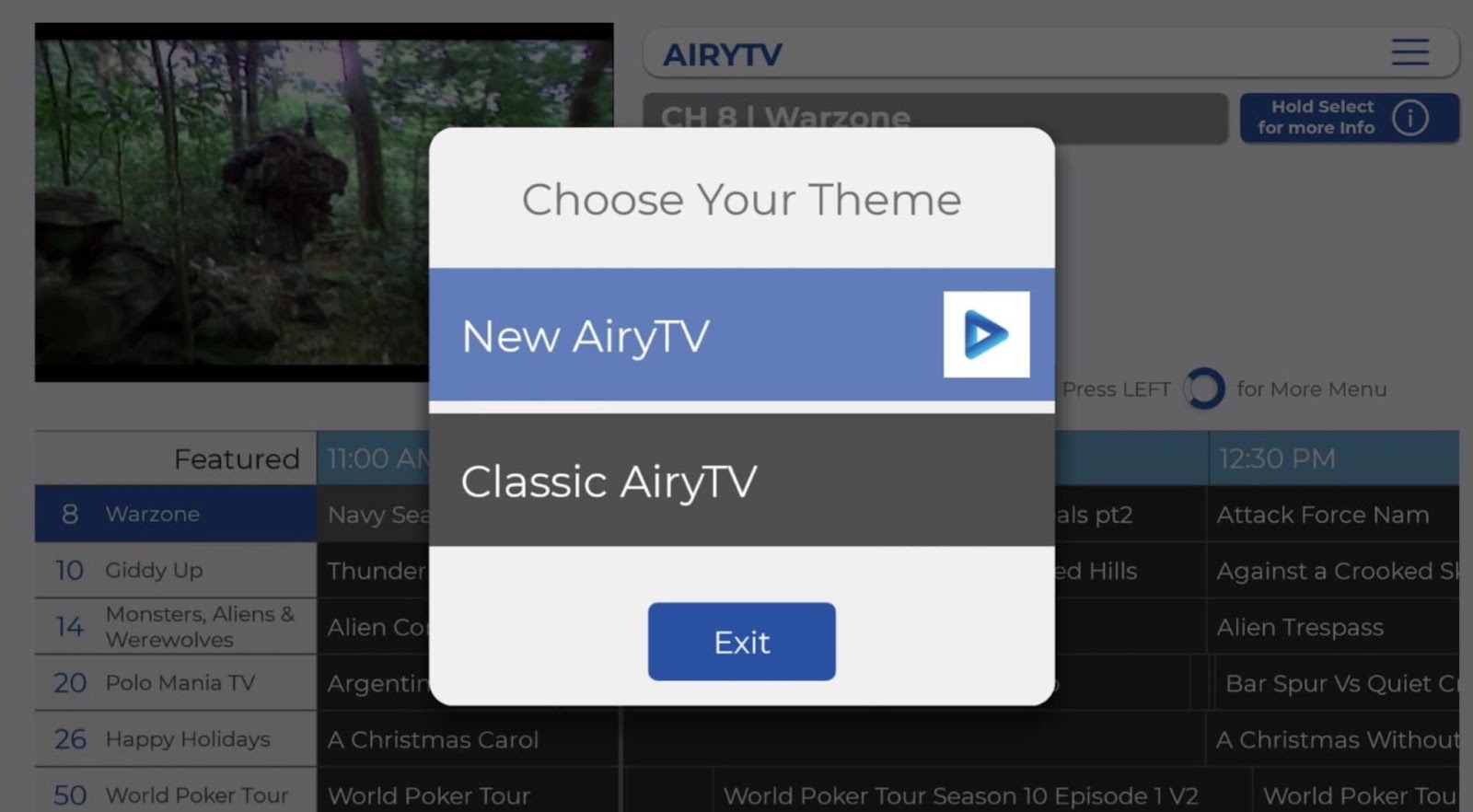 You can read the Privacy Policy and the terms of use in the top-right menu as well. When you’re done, select “Close Application” to exit. Let’s move on to instructions for installing Airy TV on iPhone or iPad.

How to Get Airy TV on iPhone or iPad

In addition to being available on Amazon Firestick, Airy TV proves its reliability by being readily available for various mobile OSs. Here’s how to install Airy TV on an IOS device.

Congrats! Now you are all set to start streaming content on your ios device.

How to Install Airy TV on Android

Since it’s an ad-supported streaming device, you don’t need to register or signup for the platform. You can start watching the content of your preference as soon as the app has finished installing.

If you don’t have access to a Firestick or any other platform that the Airy TV app is available on, or if you don’t want to install the application on your device then you can go to the official Airy TV webpage on your browser and access it there. Here’s a quick guide for that in case it is needed;

Airy TV is legal. It runs on the ads financial model to sustain its free services offering. The fact that it’s readily available on all platforms officially supports its legitimacy. The ads you see on the app comply with all these platforms, so you don’t have to worry about shady and malicious ads. The app is free of malware and safe to use.

What is Airy TV?

Created by a Washington-based startup named Showfer Media, Airy TV is a new entrant in the list of various ad-supported streaming media channels. It is a one-stop entertainment destination for streaming content for free, and you can watch anything from anime or tv shows to a live sports stream.

Foqus TV, a music channel featured on Airy TV, has a massive music database from countless artists.  Airy TV also features a War Zone channel dedicated to old movies like Aerial Gunner, Corregidor, and This is the Army. Popular wrestling matches from the 70s, 80s, and 90s can be streamed on a channel called Legends of Wrestling too. Using Airy TV is like using a better version of Pluto TV.

Airy TV also pulls in hours of content from Youtube, so in any case, you won’t get bored of it. You can even send Airy TV developers a channel request if you can’t find it on the platform. There’s one downside, though, Airy TV might not have mainstream content. So among the list of 3000+ live channels, you won’t find Comedy Central or Fox news, or HBO like you do on other streaming apps.

Why is Airy TV Popular?

The prime reason behind the popularity of Airy TV is its ease of availability. You can find it on almost every platform, including but not limited to Android, iOS, Amazon App store, and several popular Android TV boxes. Airy TV has an app for Mac iOS too. Another plus point is that if you can’t find a compatible version/application for your device, you can always use it on your web browser!

Another thing that Airy TV owes its popularity to is it being free to use with no requirements like signing up to access content and whatnot. If you wonder why it’s free and how do the people who developed it earn from it? Then don’t fret as ads on Airy TV are sufficient to support them. The platform shows ads from time to time to sustain the service, and admittedly, ads do get irritating at times. Still, whenever that happens, you have to remind yourself that you are enjoying free service. They are a minor inconvenience that can be easily ignored considering how much Airy TV offers in return.

There are multiple ways to watch content on Airy TV. You can install it on firestick, iPhone, iPad, or Android or browse it on the web browser.

Yes, Airy TV is free. It is an ad-supported streaming device. You don’t have to pay for any subscription

Can I get Airy TV on Samsung smart TV?

Yes, Airy TV is officially available for all Android devices. You can install it directly from the app store.

Is Airy TV safe to use?

Yes, an Airy TV is safe to use. Users have never reported any malware or virus problems while using Airy TV.

How many channels are there on Airy TV?

Airy TV has 100+ TV channels for every type/genre of content, such as movies, sports, anime, and more.

Can I use Airy TV on Windows?

Yes, you can access Airy TV from your web browser. Search the app’s name on Google, and the official site will be on the top of search results.

Can Airy TV be updated on Firestick?

The airy TV is automatically updated on the Firestick. So you don’t have to update it manually.

Not everyone can afford the luxury of renewing Netflix every month. Our search for free streaming services without sacrificing the quality of entertainment has brought us to Airy TV, among many others detailed on our website. Install Airy TV to get started and watch popular TV programs, TV shows, and movies for free. Thank you for reading this article.